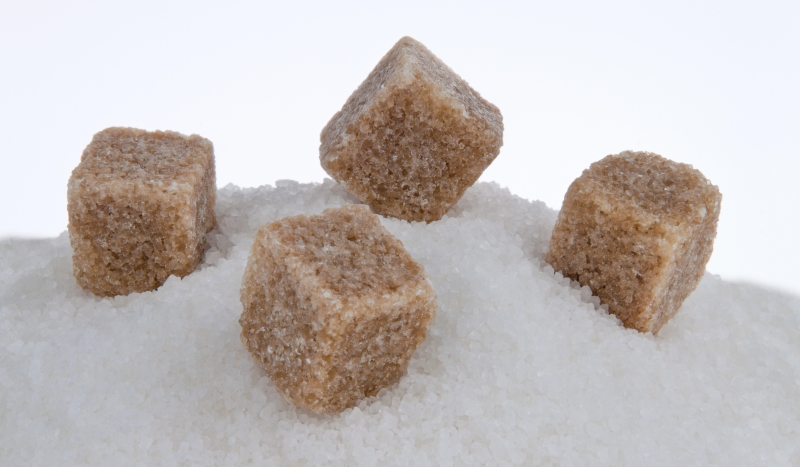 So what are we talking here? Artificial sweeteners include saccharin and aspartame, by far the two most common ways to sweeten your food, without adding sugar and piling on the calories.

Why Use Artificial Sweeteners?

Instead of natural sugar, artificial sweeteners are used in many products that are labelled 'diet' as well as others that are not. The key reason for using them is down to their low calorie content and sweet taste enabling food manufacturers to reduce calorific value of foods.

In fact, it's not so much that they've no calories in them, but more to do with the minute amounts of sweeteners required to achieve the same degree of sweetness as a spoon of sugar. Many diet sodas for example contain artificial sweeteners rather than sugar.

So What's Wrong with Sugar?

Sugar is also known as Sucrose. It is also what's called a Disaccharide. This means it has two saccharide molecules joined together. One of them is a glucose molecule, the other a fructose molecule.

So when you eat sucrose and it goes on your tongue, the sweetness sensors in your tongue/taste buds pick up the sweetness and send that to your brain. Therefore, if another molecule has similar or identical characteristics to the Disaccharide, then it should trigger the same taste bud and brain responses.

What Are Commonly Used?

An artificial sweetener is therefore any molecule that can create the sweet taste to mimmick sucrose. The two best known and most widely used are Saccharin and Aspartame.

The whole point of using artificial sweeteners is that they provide the same taste sensations, at a fraction of the calories. There may also be other positive side effects like they are better for your teeth enamel than sucrose and maybe even positive benefits for diabetes.

A Brief Introduction to Saccharin

Saccharin was developed towards the end of the nineteenth century and is estimated to taste three hundred times sweeter than sugar. Unfortunately, it can leave a slightly bitter after taste and some studies have shown that it causes bladder cancer in rats.

Although the American Food and Drug Administration (FDA) at one point considered banning it, it has since removed saccharine from its list of potentially cancer causing agents.

A Brief Introduction to Aspartame

Aspartame has also been the subject of controversy over how safe it is as, as well as Aspartic Acid and Phenylalanine, it contains methanol, a known cancer agent. Methanol, or wodd alcohol, is a poison and in the body it breaks down in to Formaldehyde - a deadly neurotoxin. Read enough yet?

You may know Aspartame as "Nutrasweet", "Equal", "Spoonful" or "EqualMeasure".

While the FDA approved its use in 1981 after studies showed the amounts of methanol involved were too small to have an impact on humans, some debate over the issue continues.

A rare genetic disorder known as phenylketonuria (PKU) means that sufferers lack an enzyme for properly breaking down aspartame and should make sure they consume only small amounts. While these substances can satisfy our craving for sweetness without the risk of piling on the pounds, its probably wise to be aware of how much of them you are consuming.

The Downsides of Artificial Sweeteners

There is increasing evidence of a range of adverse side effects that can be linked to a number of neuropsychiatric disorders including mood changes, depression, manic episodes, vertigo, tinnitus and even weight gain!

According to the FDA  (Food and Drug Administration), Aspartame accounts for over 75% of adverse reactions reports they receive. Also, however small the dose, do you really want to be putting methanol into your system!

Where Do I Find Aspartame?

We have a more in depth article on Aspartame on our sister site, as well as a list of common products laced with Aspartame here, but in essence :

How scary is that!

There is one very simple answer. If you are in any doubt over whether it is okay to use artifical sweeteners, then don't eat foods or drinks that contain them.

This means steer clear of just about every single "Diet" product.

So you are left with either avoiding foods that are high in sugar completely, or learn to have only a small portion alongside other foods that have little or no sugar.

Mercola - The Most Dangerous Substance Added to Foods